Historic Big Spring located in Dallas, Texas deep in the heart of the Great Trinity Forest has drawn distinguished Texans for centuries to what has become one of the last remaining natural springs in Dallas County. From the first President of the Republic of Texas Sam Houston to the residence of Dallas founding father John Neely Bryan it is a fitting site to host a late afternoon walkabout with one of Texas leading conservationists and water advocates Dr Andrew Sansom, Executive Director for The Meadows Center for Water and the Environment. He is also the former Executive Director of the Texas Parks and Wildlife Department.

Master Naturalist Richard Grayson invited Dr Sansom ahead of a planned speaking engagement at the Trinity River Audubon Center. The trip from the airport to the Audubon Center included a visit to Big Spring and walk with DFW biologists through one of the great wildscape spots inside the heart of Dallas. 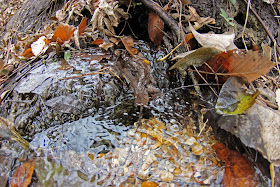 One of the only natural springs in Dallas,  Big Spring flows at a steady temperature year round with crystal clear and clean water. The land surrounding it features centuries old trees and a large Native American archeological site known as 41DL72. The ancient waters of Big Spring flow directly out of Ice Age sands in the Great Trinity Forest. Water dated to the Late Archaic. Water so clear that in photos it looks invisible to the eye.

Annually, this vent and several others put 12 million gallons of fresh and clean water into a network of streams in the Great Trinity Forest. The water is the lifeline for the woods here. It forms the fundamental foundation that influences the great swath of biodiversity below the source.

Big Spring is an oasis of natural tranquility in a difficult neighborhood. The acute nature of blight in the zip code coupled with increasing misadventures in new construction adds to the spirited conversation of how Big Spring and the aquifer that supplies it remains viable for generations to come.

In 2014 alone, the City of Dallas has removed thousands of trees for private construction purposes in the public parkland known as The Great Trinity Forest, illegally drained wetlands subject to sanction by the TCEQ and EPA. Now they are draining the same shallow aquifer for construction activities that shares the geology with Big Spring. The high residency times for water in the shallow aquifer suggest that the rate of recharge is quite slow.

Texas Stream Team Water Monitoring At Big Spring
Knowledge and making informed decisions on the health of our waterways and waterbodies is only as good as the data collected. The importance of  tests and monitoring is designed to establish a baseline for future decisions that will impact the area for generations to come. Starting a couple years ago the avalanche of data regarding the spring and surrounding area now exceeds 7,000 pages of documents and is growing at an exponential rate.

The Texas Stream Team is based at Texas State University and is affiliated directly with The Meadows Center for Water and the Environment. The Stream Team is a partnership of agencies and trained volunteers working together to monitor water quality and educate Texans about the natural resources in the state. Established in 1991, the team is administered through a cooperative partnership with Texas State, the Texas Commission on Environmental Quality (TCEQ) and the Environmental Protection Agency (EPA). 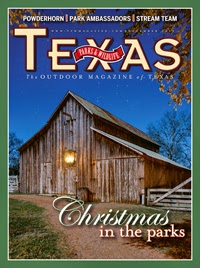 Statewide more than two thousand volunteers are trained to collect water samples according to a water quality plan approved by TCEQ and EPA. The monitors make field observations and analyze
the samples for dissolved oxygen, pH, specific conductance, Secchi depth transparency, temperature, and E. coli to assess the quality of aquatic life and contact recreation conditions of the water.

The December 2014 edition of Texas Parks and Wildlife Magazine has a great writeup on the Texas Stream Team and the work done to highlight water quality concerns at places like Big Spring.

Since water monitoring began at Big Spring, volunteers have logged more than 150 hours of work. Many have assisted in testing the water at Big Spring since inception. Boy Scouts, high school students and even Southern Methodist University Engineer's Without Borders have attended monitoring events at Big Spring. Water samples are collected monthly with on site testing for pH, dissolved oxygen. E.coli testing is done offsite at the offices of For The Love Of The Lake at Casa Linda.

One set of tests are conducted at the head of Big Spring using an 80cm copper pipe which is placed horizontally into the head itself under the bank. This allows for accurate testing for e.coli and limits the chance for any error.

An additional battery of tests are conducted in the pond itself. The pond testing site allows for a better gauge of dissolved oxygen in the spring, E.coli and general health of the environment in the vicinity.

The data collection as time goes on will establish clearer protocols for future activities around the spring site. While nearly 40 individual tests have been conducted between theses two sites, the data needs more points to form a valid statement on what makes the spring tick. One idea is a detailed aquifer study that would develop a hydrology model for this part of Dallas so that the spring can be better understood.


It is always fascinating to watch professionals at the top of their game share their insights into their work with colleagues in their field. The field trip to Big Spring was no exception. Texas Parks and Wildlife Biologists Derek Broman and Brett Johnson really shone with some exceptional analysis of the spring and outfall areas in the woods beyond.

Both Broman and Johnson have been working on a variety of animal tracking projects that involve citizen engagement at the very core. Urban bobcat study is near the top of that list with detailed observations, game cameras and tracking programs. You can follow Derek Broman's projects on a website called inaturalist. Derek's bobcat study area is 49,000 acres bordered by SH 183 to the north, SH161 to the east, SH180 to the south and Interstate 820 to the west in what we call the mid-cities area of the metroplex. Derek was featured in a great piece in the Dallas Morning News by Ray Sasser this year about the project http://www.dallasnews.com/sports/more-sports/outdoors/20140503-trying-to-explain-more-about-largely-unseen-bobcats-in-d-fw-area.ece

Brett Johnson also has a deep interest in wildlife with a long tenure in the 1990s working as the bear researcher at the world famous 200,000 acre Philmont Scout Ranch in New Mexico. His responsibilities included tracking, trapping and relocating problem Black Bears at the ranch. He also oversaw a variety of events at the ranch in the off season including the Ponil Complex Fire in 2002 http://www.lepp.cornell.edu/~seb/philmont-fire/index.html. He is a popular speaker with local community groups and is the go-to guy when someone reports a mountain lion, bigfoot or chupacabra in their alley.

Bryan's Slough and Beyond
Wildlife educator and biologist Becky Rader was on hand to highlight the wide diversity of flora and fauna at Big Spring and beyond into the woods and out into a meadow area. The influence of Big Spring's water stretches far into the woods beyond allowing for an array of animals, shellfish and plants to grow into large populations thanks to the constant water source. Mink, river otter, beaver, raccoon and white tailed deer are well established in this area rarely seen but leave large amounts of tracks in the small gravel bars and flats of the slough. 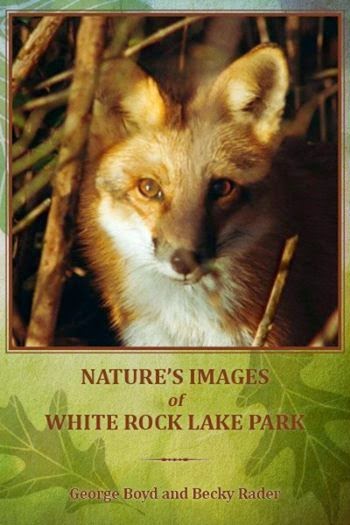 Big Spring drains into the first order stream known as Bryan's Slough in this neighborhood(known also as Oak Creek to the north). From Big Spring the slough meanders south and southwest where it joins White Rock Creek near the mouth with the Trinity River. I often tell people that if you want to see what White Rock Lake looked like before a lake existed come see lower White Rock Creek.

Becky Rader has an extensive knowledge of the flora and fauna in this watershed. Her tireless efforts for preservation and restoration at White Rock Lake are seen by every visitor to White Rock Lake in the prairie hillsides and woods that surround the park. She has just authored a book on White Rock Lake's wildlife entitled Nature's Images Of White Rock Lake Park co-authored with the late George Boyd. Fascinating look at the amount of animals seen in that watershed and in such an urban landscape.
During firefighting activities during the Big Spring Wildfire it was necessary to temporarily dam the slough so that firefighting equipment could cross. That dam was removed late summer and the slough, also known as Oak Creek now flows unrestricted by man. At different times the little Slough here can do the most peculiar of things. It is a quick stream to throw a temper tantrum and jump the cut banks after a cloudburst thunderstorm event. Hardly ankle deep in many spots it can rise with rains and carry all matter of poorly rooted willows and strand man and beast alike.
Beyond the slough, the fire damaged areas show little of the flames that swept across the land. The black soot stained ash trunks on the far edge of the meadow are now complimented with winter stands of tall White Aster flowers growing in colonies that dot the 15 acres of  wet meadow and woods. An unexpected sight after so many cold and frost filled mornings of late Autumn. I say from about this spot you are about as far away from concrete inside Loop 12 as anyone can find.

From high spots on Pemberton Hill in the winter months one can see through the leafless trees a vista of Downtown Dallas beyond. As short five miles as the crow flies.

That vantage point sits on a humble piece of farm property currently owned for 135 years, come 2015 by the Pemberton family.

At this spot once stood a log cabin built in 1880. Land purchased from Margaret Beeman Bryan, the widow of John Neely Bryan, the founder of Dallas. Noted in a tilled area above. This spot served as a blacksmithing area for a dairy farm operation owned by Edward Case Pemberton. 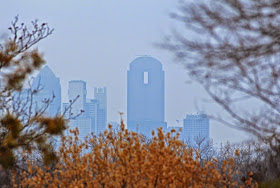 The view at Big Spring has never really changed much in the last 135 years. Only the horizon beyond. What was once prairie and bottomland trees turned in that amount of time into one of the largest metropolitan areas in the United States.
It is in that city center, five miles distant that the Pemberton family name is boldly cast in metal, adorning a historical marker not 50 feet from Main Street on the county courthouse square. An old example of North Central Texas cabin craft stands on that spot, dedicated to the man whose widow sold Edward Case Pemberton land on what is now known as Pemberton Hill.
Some driving through Downtown Dallas might glance over to the cabin and think to a time when man weighed lightly on the land, a time when there was lots of elbow room. When the water was clean to drink from the ground and the critters ran free. It's still here in Dallas, at Big Spring.

Water and conservation of the resource were of paramount importance to those first settlers to found Dallas. As the city grows ever larger and demands become greater, the fragility of Big Spring and places like it will take center stage. It is hoped on a state level that organizations like The Meadows Center for Water and the Environment can act as a guiding light in sound and reasonable decision making with regards to Texas most precious natural resource, water.